The Clyde Valley orchards have a long history extending from the early monasteries to the industrial development of the Central Belt, when the area became one of the major fruit producers in Scotland. Since that time, local fruit production has declined dramatically due to competition from global markets and supermarkets selling cheaper and more readily available foreign fruits. As a result, many of these orchards have not been effectively managed for some years, others have been converted to pasture, lost to property development or reverted to scrub and woodland. 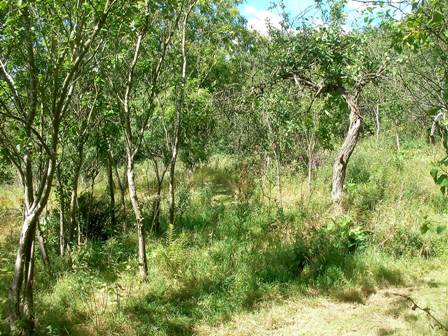 The tradition of fruit growing in the Clyde Valley probably dates back to the 5th century and the establishment of local monasteries. Yet it isn’t until the medieval period that we find references to local fruit growing, and orchards are depicted on a number of early maps. By this time, the principles of fruit cultivation were well known by the clergy and nobleman, and orchards would have been a common site in the grounds of abbeys, castles and large houses.

The growth of commercial fruit production

Commercial fruit growing in the Clyde Valley dates back at least to the early 17th century. It was much encouraged by the Duke of Hamilton and from this time, there is a fair amount of written evidence to indicate that this was an important area for fruit production in Scotland.

It is estimated that by the end of the 18th century, over 300 acres of Lanarkshire were devoted to horticulture with around 75% of this on the steep banks for the Clyde. An entry in the New Statistical Account states that, at about this time, over sixty varieties of apples and twenty-four of pears were grown in the Clyde Valley. Orchard fruit was generally grown with an understorey crop such as shrub fruits, potatoes, oats, beans, and barley. These, plus the pasturage, was usually retained by the landowner but the trees were sometimes managed and utilized by others.

Until the late 19th century, apples, pears and gooseberries were common but very few plums, which initially were grown on their rootstock. By the middle of the 19th century plums were becoming increasingly important commercially. Scott’s jam factory opened in Carluke in 1879. Soft fruit, particularly strawberries, were starting to develop as a commercial crop.

As the population and industry increased in Glasgow and the Central Belt there was a growing demand for local fruit. Between the mid-19th century and the early 20th century the Clyde Valley was probably the largest commercial orchard area in Scotland.

The decline of the orchards

From around 1920, the fruit industry went into decline. This was mainly due to competition from global markets and the gradual expansion of supermarkets that provided cheaper and readily available foreign fruits. Local orchards were generally stocked with large and tall ‘standard’ fruit trees that were difficult and costly to manage and harvest. In addition, various diseases were causing loss of local fruit, including a new strawberry disease, red core root rot.

The significant loss in the commercial value of local fruit has resulted in the neglect of the orchards and conversion to other enterprises, including garden centres. Many of the orchards along the valley have not been effectively managed for some years, others are converted to pasture, lost to property development or revert to scrub and woodland. Where they remain, owners often lack the incentive and resources for their management.

It is estimated that over 50 hectares of orchard has been lost or abandoned in the Clyde Valley area over the last five decades. This leaves around 124 orchards with an area of 73 Hectares that could still be described as productive with the fruit being used by the owner or sold in local farm shops and deli’s.

The news is not all bad however. Over the last five years almost 2000 new apple, plum and pear trees have been planted in privately owned, school and community orchards. Funding has been provided in the past by Clyde and Avon Valley Landscape Partnership (CAVLP) to carry out restoration work and, most importantly,, planting new trees for the future. This is something Clyde Valley Orchards Limited would like to continue in the future using the income from our product sales to support these initiatives.

With an eye to the future, most of the new trees are apple varieties, this provides greater opportunity to use the fruit for commercial purposes as the apple season can extend from August through ‘til December in a good season.

Through CAVLP we have purchased apple juice production equipment which allows us to manufacture up to 3000 litres of juice in a good year. All the picking, sorting, pressing, bottling and labeling is done with the help of our own volunteers and Clydesdale Community Initiatives (CCI) at Langloch Farm in Lanark.

There are some very interesting historical accounts of the orchards of the Clyde Valley. Some of the best are available on line or can be downloaded from the following sources:

Also, a series of 24 local tales written in Scots prose. Robert McLellan. Linmill Stories. Published by Canongate Classics. This is a fascinating account of life of a small boy growing up in the early part of the last century on a farm near Kirkfieldbank in the Clyde Valley. Used & New versions available from Amazon.